The Spodooki Sapphire series was released in March 2016.  With 108 beautiful cards to collect, it’s truly difficult trying to finalise your favourite.  The illustrations on these cards are simply gorgeous – the picture range includes young girls, dogs, beautiful shells, glittering fairies, under-the-sea unity cards, meercats, international Queens, special unicorn and a whole lot more.  Spodooki Sapphire cards are drawn by lots of existing artists who have drawn illustrations for the Pink and Mint range, as well as some new artists who have come to the party.

Spodooki swap cards were launched in March 2013, and there are now three series of cards in the range to collect – the Pink series and the Mint series, and all cards can be purchased concurrently.  Spodooki cards and albums are available primarily online, but since leaving the playground (fickle kids!) they’re harder to find in shops.

So girls everywhere – whether they live in a small country town like Panmure, or a big city like Melbourne – can continue to get their hands on these gorgeous little beauties!

The artists who have drawn the illustrations come from all around Australia, so wherever you are, there’s possibly an artist who lives not far from you, who has contributed towards creating Spodooki. 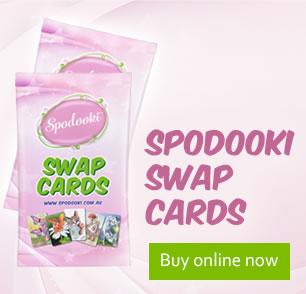